Newer versions of the K40 sometimes ship with a digital control panel. This panel retains the main power switch but the Calibrate (potentiometer), Laser Switch, and Laser test buttons are replaced by push buttons and a controller PCB.

Warning: this vintage K40 control panel does not ship with a laser current meter. Therefore it is not possible to know the actual operating power the laser is running at a particular digital setting. It is important to monitor the actual running power of the tube during operation to maximize the tube's life.
All tubes will eventually fail and are generally considered consumable but their life can be optimized. Tube life is proportional to the running current* so setting the machine to run at the minimum current required for the job and staying under the tube's rating will optimize its life.

Some users have made the argument that although running the laser at higher currents may shorten the life of the tube it also shortens job time, so it's worth it.

I recommend adding a current meter to your machine if you do not have one. The meter will assist you in running your laser at a current that is consistent with optimizing its life consistent with your expectations.

Add an analog meter to your K40

Most manufactures specify their tubes reliability @ 1500-2000 operating hrs running a working current of 20-22 ma. Check your tube's specifications, especially if you have replaced the stock tube.

The longest life I have seen specified is:


* There are other factors such as shelf life and operating temperature that cause a laser tube to fail.

Please consider donating (button to the right of this post).
Your donations help fund additional research, tools, and parts that I will return to the community as information.

Thanks to +Chris Hawkins for donating a panel for this exploration

A donated K40 PowerLED V3.0 was bench tested using a simple tester made from a USB adapter a few resistors, a voltmeter, and connectors. This tester provides 5V through a USB brick and listens to the IN and P pins of the panel.
This tester was connected to the panel and various tests were performed as described below. 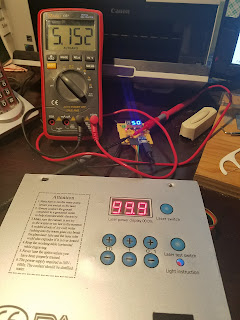 The schematic of the panel and the test board as it develops is here:

You will note that this control panel connects both the P + & P- of the panel to the K+ signal on the LPS rather than the P signals on the LPS. Wow, now that's not confusing :(.

Also, note that nothing is connected to K- on the LPS and P+ & P- on the control panel are shorted together. 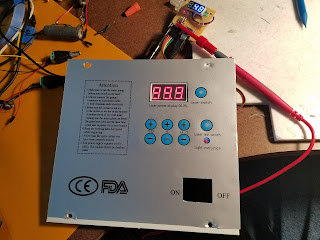 This alternate action PB enables and disables voltage to the IN signal and the Laser Power Display. When this switch is OFF the display is off (except for decimal points). When the display is off the IN pin to the LPS is reduced to zero volts. When this switch is ON the IN signal will be a voltage proportional to the % displayed on the Laser Power Display.

There are 3 sets of digit controls with a + and - control for each. These pushbuttons (PB's) allows the setting of the respective digit in the Laser Power Display. 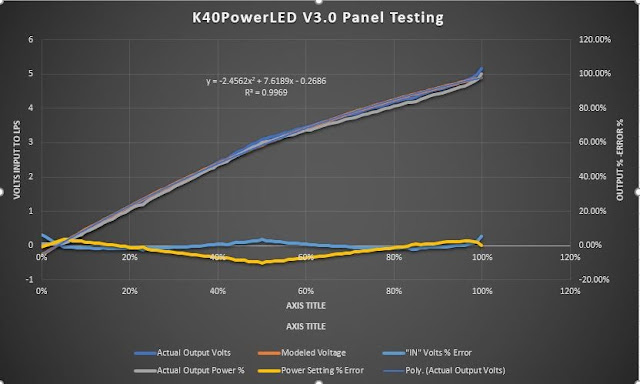 This panel draws about .2 amps from the stock K40 supply. That's about 20% of the safe 5vdc capacity. Note that some new machines have an LPS with the fan missing. I have to believe that the stock LPS is running on its limit (1 amp w/o fan) with these vintage machines.

NEW! Go figure, the IN output is a PWM signal 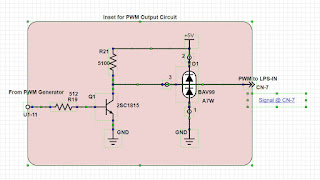 PWM signal on IN 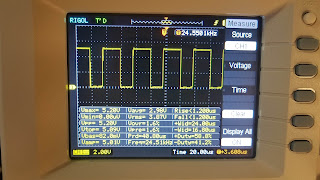 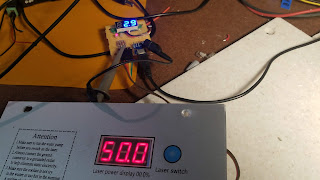 As you can see in my test setup the power was set to 50% and the IN voltage read 2.9. The readings here are average since the signal is actually a PWM square wave. My cheap DVM read 2.9 (which we now know is an average)

*it would be useful to test and plot PWM linearity, i.e. panel settings vs actual PWM DF.

Why is the "IN" pin driven with a PWM?

Keeping in mind that the digital panel wants
Since most embedded controllers have PWM capable outputs it's rational to use PWM rather than a D/A approach. The controller can manage the display, switches, and the power this way.

Yes. An open-drain could drive the IN pin on the LPS but in my assessment, it does not gain you anything that I can fathom and has downsides.

Should we use the "IN" pin vs the "L" pin for power control?

No. Although this is an ok way to control power locally between the panel and the LPS, connecting a controller to the IN pin is a bad idea because:
*the software that is sending GCODE

The display and controls worked as expected. See the graph for data on accuracy and linearity errors.
I felt the .1 digit was a bit overkill for a Laser Engraver as I think there are many variables in the process that are much larger than a .1% laser power change. I did not plot the tenths.

The % settings vs actual output voltage were pretty linear. The error increased to its largest value (10.15%) exactly at 50%  and then decreased until it reached 100%. I suspect this is related to the type of D/A that the controller employs (actually it's likely because the IN signal is actually a PWM).
From a practical perspective, the linearity error doesn't really matter. What is important is whether the panel can provide a full range of adjustable power from 0-100%. In normal use the operator adjusts the power to suit a particular job noting the best setting and as the laser "wears" that setting will change anyway.

During testing, I noticed that sometimes the % value would decrease when the + key was pressed and sometimes it did not recognize a keypress. More of a nuisance when setting the power but a safety issue if the Laser Switch behaves that way.

My biggest concern is how the laser is enabled. The embedded controller apparently reads the Laser Switch (the fact it is a momentary PB yet operates as an alternate action switch is the giveaway) and sends the set voltage to the LPS.
If the Laser Switch is alternated to the OFF position it puts 0V on the IN pin and this is the only way the laser is "turned off". Essentially the laser is enabled, just at 0 power. I guess that is not theoretically different than disabling the power with one of the other enable functions (K or P) but it just feels wrong to me. It's reducing the power NOT disabling the LPS.

Let's consider how this safety mechanism can fail:

I doubt that this kind of circuit strategy for making a laser safe would be considered "fail-safe" according to OSHA regulations.

Definition of a Fail-safe Interlock
An interlock where the failure of a single mechanical or electrical component of the interlock will cause the system to go into, or remain in, a safe mode.

I am not under any illusion that the K40 is SAFE as shipped although I do wonder what the FDA symbol on the K40PowerLED panel infers???? That said, I endeavor to follow OSHA and FDA recommendations whenever possible while doing conversions. This is to enhance my own safety and the safety of those mimicking my builds. To that end my machine has interlocks. These interlocks are not in series with any firmware and consist of nothing but wire, connectors, and mechanical switches. They all fail in the disabled mode...

For those using this panel; ensure that you install interlocks on all accessible covers using the P+ loop on the LPS. Put front and rear cover interlocks in series with the water-flow switch.

The K40PowerLED panel would at first glance present itself as a high-tech implementation of K40 control. In my assessment, it does not provide much if any, advancement in the operation of the K40. In fact, the missing laser current meter makes an important operational measurement invisible to the user. Running overcurrent is the fasted way to shorten the life of a tube. Without a substantial improvement in functionality I am not willing to take the safety risk I think this panel may present.

I do not think that further exploration into this panel will reveal more than the actual design that was used.
I am noodling if a safer, and more comprehensive control panel is wanted, needed, and cost-effective to improve the operability and safety of K40 conversions. Let me know your opinion in the comments..