The High Voltage  Transformer (HVT) is the business end of the K40 LPS. To date we have little knowledge of what is inside that "potted" assembly.

That is about to change as the result of the communities contributions to the HV lab and the dead HVT that  +Phillip Conroy sent to me all the way from Australia.

These two samples were first tested using test methods that I devise while trying to find a way that we could test LPS's safely and at lower voltages, with commonly available equipment.
After the tests, one of the samples was torn down with hopes of discovering what was inside the potting.

The HVT's that +Phillip Conroy sent were tested using the simple 9V battery test and a ZVS (Zero Voltage Switching) flyback driver design that I have been tinkering with.

I tested both samples with the flyback tester made from ZVS driver.
One passed and one failed.

With a known bad sample I could now proceed to try and disassemble the potted HVT module.
After removing the outer shell with a dremel saw and chisel I tried various methods:

I heated the unit to 450F and the material would flake off, rather than chip when stabbed with a pointed. While it is hot the potting becomes a hard chalky-like consistency. With careful poking I got parts to release. Unfortunately by the time I discovered this technique some of the parts had already broken and circuitry came off  with the chips making it harder to guess the circuit. At least I have one method that works and I now know where the parts are.

Results of Tear Down #1

I learned the following from this tear down.
Notes: 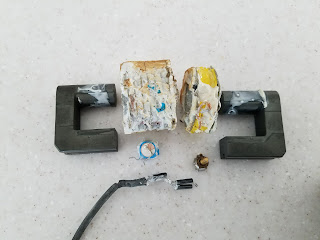 A Much Better Autopsy & Analysis

Since my attempt to spill the guts of a K40 HVT +Nate Caine expertly cross sectioned a HVT. One of two from a 80 watt machine. By inspection the single HVT from the pair looks to be the same construction as my 40W sample, except for the number of diodes in parallel.

+Nate Cain's Autopsy disclosed that the circuit that I could not identify is a HV full wave bridge made up of  4 sets of 3 diodes in parallel. Each diode is made up of 20 diodes likely to attain the roughly 20,000V the HVT requires.

One difference between the K40 and K80 transformers is the # of diodes in parallel. The K40 has 2x in parallel whereas the K80 has three.

Explore a chemical alternative to removing the potting so that we could potentially test the internal components of bad HVT's.
Cross section the other K40 HVT sample like +Nate Caine did.
Cross section one of the diode pairs.
I think we certainly have enough information to understand the HVT module, the last piece of the LPS puzzle. Now we need to find out why these fail so often.
Update the schematics to coincide with recent community findings.

Enjoy and comment
Maker Don
Posted by DonKJr at 1:48:00 PM