Introducing Alignment Tools for the K40

Anyone that owns a K40 dreads the optical alignment process because:


This post outlines my attempt to make the optical alignment of a K40 more visible, precise and stable by addressing 2-4 above.

K40 optical alignment can be a challenge because only one axis can be visualized at a time. The alignment is further complicated by the independent mounting of the laser tube and the gantry. Ideally the laser tubes beam should exit and be aligned to be:
This means that the beam should not exit the laser or any mirror on an incline of decline relative to the motion of the x-y gantries.

Using a single target, it is difficult to visualize any change in z direction as the beam exits the laser and reflects off of a mirror.
For example the beam can exit the laser at an upward angle and still hit the 1st mirror in the center. Then that mirror can be adjusted to hit the 2cnd mirror in the center in spite of its upward trajectory. This change in Z as it turns the corner at the 2cnd mirror can put the beam well out of range of the third mirrors small entry aperture. Worse case the beam then enters the objective lens at an angle and  exits into the side wall of the nozzle.

The solution approach entails the design of a jig that installs in the machine providing a multi-point visual indication of where the beam is referenced exactly to the Z axis of the gantry.

Using this theory the solution consists of these parts:

The target holders are made very square to the respective axis's gantry. They are glued at a 90 degree angle to an upright and horizontal set of surfaces that when installed reference accurately to the respective gantry.

These parts are designed so that they can be cut on a K40. The design documentation is not complete and I probably won't spend any more time on them unless a substantial number of the communities want to make their own.

Let me know in the comments if you would value and use these tools.

The targets are a 1/8 grid printed on blue card stock. Actually my printer has a feature that prints graph paper. Alternately you can scan graph paper and then print it on card stock. The targets that are held in the target holder are all cut the same so that when they are clamped to the top edge of the target holder the grid is in exactly the same position relative to the target holder and in turn the Z plate. This multiple point target setup gives an accurate view of the beams position in 3D space as it moves from mirror #1 all the way to the last mirror.
Target masters will be posted here later after the tests are completed. Targets are made by cutting along integrals of the grid starting from the right side. Laying them on the holder and marking the windows hole provides a nice reference. Note though that the hole is not necessarily intended to be accurately place relative to the proper center line of the beam. It is simply a helpful visual reference.

The Y target holder is built so that the target is held perpendicular and at 90 degrees to the Y axis gantry. It can be set at position #1 or 2.
There is a slot formed on the right side to slide the target into and insure it is registered to its right side. This holder slides (without fasteners) over the top and straddling the Y gantry. You could add a locking screws to this holder like the X holder but I did not find it necessary.
This target has a large hole that approximates the beam aperture. 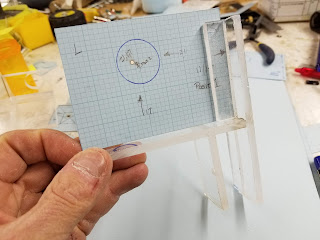 The Y target holder straddles the X gantry with a target positioned at 90 degrees. It is movable to position #3. This holder also has a slot to repeatedly register and position the target.
This holder can be moved to position #3 or #4. Note that this holder has a nylon screw on its left side used to positively lock the holder to the gantry.
This target has a large hole that approximates the beam aperture. 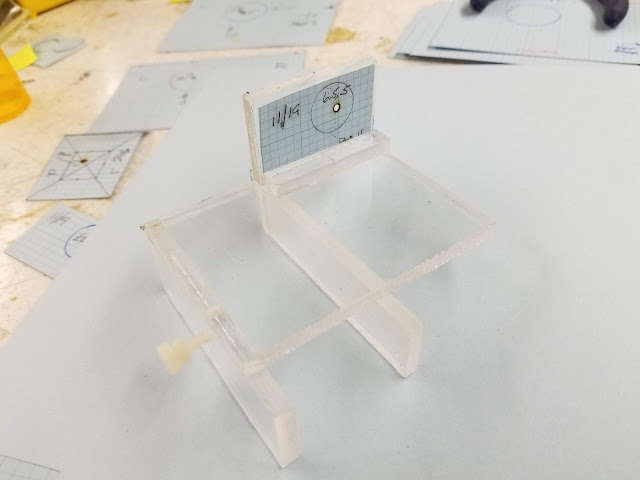 Mirror targets do not have a holder. Instead the target is folded and laid on the mirror frame. 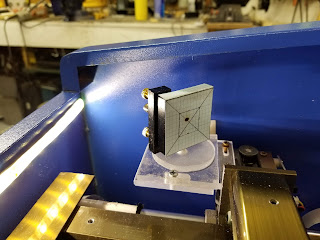 If you do not have mirrors 1-2 aligned properly the beam will not enter mirror #3 at the correct angle and position. If the position & angle of the beam entering mirror #3 is not perfect the beam will not enter and exit the objective lens properly and likely will hit the side of any air assist cover that is on that assembly.
The hardest alignment task is to get the beam to reflect off mirror #3 and enter the objective lens perpendicular to the table and in the center of the writing heads optics.
Using the same theory of having multiple points on a graph I constructed another target holder that slides over the head.
This holder is made from a smaller medicine bottle (put size here) that has a slot cut in it just at the flange where the cap fit on.
A hole was drilled in the bottom of this bottle with a 24mm forstner bit and then filed slightly so it fits snugly over the objective lens cylinder. I am using a LO objective assembly.
The air assist nozzle is removed. A target is slid into the slot of the bottle and the modified bottle is pushed onto the cylinder until it seats at the top.
This provides a target that is closely on center to the objective lens.
When the beam is fired you can tell if it is in the center of the cylinder.

Using these tools and evaluating the targets will be in separate post. Here I will summarize their position using an optical layout where the positions of the targets are identified.

This photo is an initial attempt at describing the target placements and how to interpret the errors on them. Likely still confusing but as I complete the testing I will be back with more explanation. Note that this diagram is rotated 90 degrees, the machines bottom is on the right. No idea why I did that and this schematic need improvement. 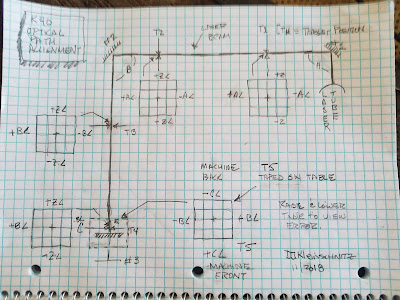 This photo shows the target in position #1 just as the beam exits the laser compartment. Zooming in on this photo you can see where the beam burned the graph paper and defines its position relative to the Z plate. The graph allows you to see its X (left-right) and Z (up and down) position as it hits the target. The target is moved to a position as close to mirror #2 as the holder will allow. Another burn is created either on the same target or a fresh one showing the position of the beam at this point along the gantry's path.
If the beam is moving;

....then the burn at position one and position #2 should be in the exact same position on the target. 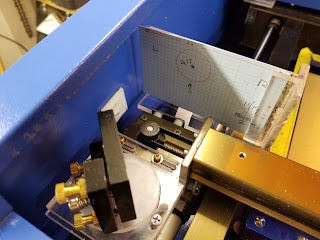 The next photo shows where the beam hits the graphical target on the mirror. That graphic target is also cut so that you know where the mirror center is relative to the top edge of the mirror mount. As you can see the laser burned in the upper left quadrant just off center. 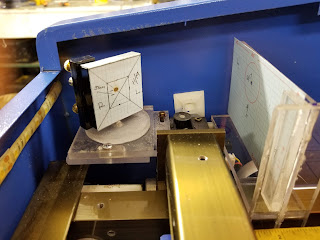 This position is just right of and as close as possible to mirror #2 but attached to the X gantry.
In this case the beam is in the lower right quadrant. 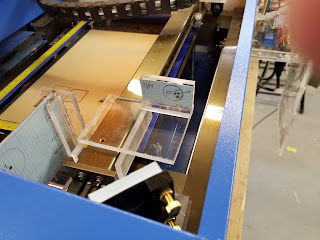 The target holder is then moved to the right extreme on the X gantry and a new spot is burned.
The difference in position of the beam from position 4 will show the change in trajectory as it hits mirror 2 and traverses to mirror 3. 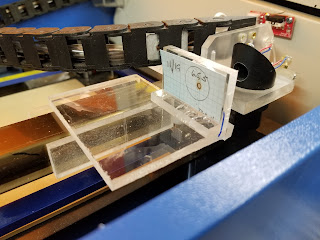 As the beam enters the last mirror (#3) it is folded downward and through the objective lens. This portion of the alignment is the most difficult because the #3 mirror aperture is small and the angle that the beam enters mirror #3 is critical. To make matters worse the stock #3 mirror mount has no adjustments.
There are 3 type of errors that can be found at this position:
All of these errors have to corrected by adjustments to mirror # 2 and in some cases all the way back to mirror #1. To assist in seeing the trajectory of the beam and its position through the head the objective target holder is used.

Depending on how carefully this tube is constructed it give you a view of the beams placement concentric to the objective lens. 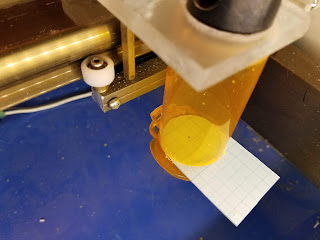 This method reveals the position of the laser beam at three points along its path showing its position in more that one axis at a time. This is expected to enable more accurate alignment, insureing that the beam is aligned to the gantry's planes of movement.

Instructions on how to perform an alignment using these new tools.