Please consider donating (button to the right of this post).
Your donations help fund additional research, tools and parts that I will return to the community as information and how-to's.

Optical alignment of the K40 is painstaking. Since the beam is invisible adjustments have to be made incrementally vs continuous. Adjustments consist of putting a target material, sticky note or tape over the lens that is the target of the beam, pulsing the laser, make adjustment etc.etc.
It would be desirable to have a means of seeing the light on its optical path so it can be adjusted dynamically.
I have observed  many attempts at creating an through the optics visible alignment beam such as:

Here is a list of challenges I have encountered trying to make alignment visible:
So far it has been more challenging to align the alignment tool than to just align the mirrors using the standard approach :).

Before embarking on the optical path modelling I redesigned the head mount.
This work is in a separate post: http://donsthings.blogspot.com/2017/01/k40-optical-path-improvements.html

I stepped back and decided to model the optical path so that I had a numerical sense of where things are. 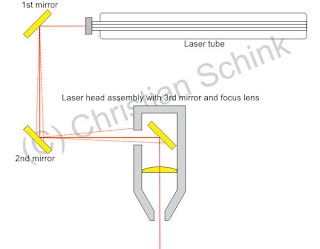 My goals for modelling are:

The thing that bothered me about the typical K40 alignment approaches is that the optical path is aligned a single point at a time though the use of targets. This works "ok" if only a single mirror needs tweaking on an already square and parallel optical path. However its necessary to understand the overall optical path position in 3 planes.

To get the best performance anywhere on the bed:

Looking from the top
Looking from the side:
I concluded that a better way to align the optics was to establish a reference plane that was aligned parallel to the gantry's x movement. This would work like an optical bench. By putting optical targets on this plane and firing the laser I could detect and measure the parallelism of the full optical path in two axis and at multiple points at the same time. Then looking at the targets would reveal what needs adjusting.

Requirements and sources of error:

To achieve the above requirements I decided to make a "bench" that is affixed to the gantry.

The bench is made up of a steel plate, struts and fasteners. The bench surface plate is constructed of a .035" thick sheet of steel that was cut to fit in the K40's bay and around mirror #2. This metal was procured from Home Depot.
The bench is mounted on top of precisely fabricated wood struts that tightly hug the gantry in x and Y. The dimensions of the struts were carefully established to space the bench plate up from the gantry surface making its surface level with the top surface of the #2 mirror mount as well as the head.
With this setup the bench plate, the top surface of the #2 mirror mount and #3 mirror are now on the same and hopefully level plane. This plane becomes the datum that all targets are referenced to. The bench plate is fastened to the struts for stability using fasteners and magnets. See drawings for dimensions.

The targets and their holders are then designed in reference to the bench plane. The target holders are designed such that the center lines of the targets films are the same height off the bench. The single target image is designed to be used in three places:

The main target is placed on the wall inside the laser cabinet with the target graphics facing inside the cabinet. 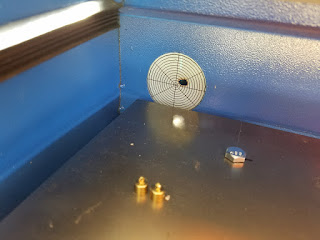 The target films can be placed anywhere on the bench plane by folding them and using magnets to hold them in place. 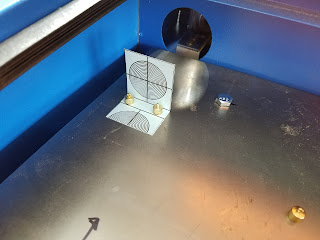 The target holder for # 2 mirror is designed to be installed on the mirror mount and features a replaceable target film made from printing the target on card stock.

I set up 4 targets for this test.

In the picture above I aligned the x axis of all the targets laying them out from left to right. Progressing left to right we observe that the beam is on the same plane in each target from target 1 though all the targets to #4. Since these targets are sequential, at the same height on the bench and spaced apart on the Yaxis it shows that the laser is parallel to the Y axis of the gantry all the way to mirror #2.

We have 3 data point in alignment and that proves the laser is level with the Y axis of the carriage.

Seems the theory of using a bench has proven to be practical.

What do that results on each target tell us?

Target 1: the laser beam exits just to the upper right of the hole in the frames center. This is not germane to alignment but does give a dimensional reference point relative to the cabinet.

Target 2: the left right (x) position of the spot on the target is not important because the x position of the target was not of interest. Later a X alignment ruler will be added to the bench to align the X. What is important is that the beam mark is directly on the center of the Yaxis.

Target 3: this target can be interpreted like target 2, just further away from target 1. The beam is still on the center of the Y axis meaning that the beam is not pointing up or down as it approaches mirror 3.

Target 4: shows that the beam is still straight on mirror #3 and slightly to the left of center. Mirror #3 should be moved to the the right looking from the front of the machine. I just reinstalled this mirror so its not surprising its off center.


Encouraging results for the first test .......

After just 2 movements using the thumbscrews on mirror #2 mount I achieved these results. 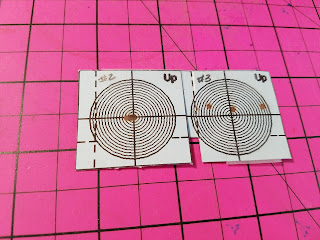 The final proof, is the objective lens perpendicular?

Alignment test of the objective lens

The light going through the objective lens is checked for perpendicular-ism by lowering the bed, pulsing and lowering again multiple times. If the beam mark stays in the same place it is perpendicular. If it moves off center it is not.

A target was laid on the bed and positioned until the burn was on the center mark. Then the above procedure was run.

As you can see the beam stayed very close to the same place (highlighted inside the box on the left photo). With these results its clear that the beam in this machine is parallel and aligned.

In the examples above I used colored 100lb card stock. Below are some other ideas on materials.

(From: Jeff Glee.)
If it is possible to lower the beam power to the single watt range, a Post-it makes a great beam locator. The dye used to color the paper is temperature sensitive, and darkens when hot. Depending on the intensity used, it may be necessary to attach the post-it (I used 3M spray adhesive) to a thin aluminum plate (less than 0.1") to help dissipate excess heat and prevent flames. Different color Post-it's react differently, but the best I have found is the bright pink color. Visually, it is about the same effect as you see on commercial fluorescent plates. I have yet to try it at higher than about 2 watts with a 5 mm beam, but given sufficient thermal dissipation (thicker backing, or copper instead of aluminum), higher intensities should be viewable without burning.

I like that along with nearly perfect visual alignment in 3 axis I now have a record of beam position for multiple points along the optical path.