It is quite common for the Laser Power Supply (LPS) in your K40 to fail. Although our knowledge of the LPS design has been dramatically increased it is still unclear why certain parts of the supply fail.

I continue to collect failed LPS's dissecting each to see if we can find a reason for failure and solutions to potentially extend their life.

K40 LPS are high energy supplies and it is very easy to experience cascading failures when making repairs. If you consider the cost the components you could easily spend as much on a repair as a new supply!

The stock K40 comes with LPS's in a few flavors. We have tried to categorize these supplies using the color of their connectors as a gauge. K40 LPS's typically have either all green connectors or both green and white connectors.

We have a fairly accurate schematic and have identified most of the replaceable parts.
Other posts regarding LPS information can be found under this search link:

I also collect failed LPS in an effort to better understand them and their modes of failure. If you want to donate comment below or PM me at +don kleinschnitz


I will discuss these three components and their replacement in some detail but first lets discuss safety and life threatening risks.

I do not recommend repairing your own LPS!

That said, removing and replacing components in a powered down LPS can be done successfully and safely if done correctly.


I am not guaranteeing that if you follow these procedures you will be safe.

ANY REPAIR THAT YOU DO IS AT YOUR OWN RISK AND IF YOU PROCEED PAST THIS POINT YOU ACCEPT THAT RISK AND ITS CONSEQUENCES.

Need some proof that an operating LPS is lethal.

Going About a LPS Repair

I haven't found a magic way to tell what part is bad. One or more of the parts cited below can cause one or more problems by themselves or as a catastrophic failure.

Here are some scenarios I have seen:
I will add more scenarios as research continues.


Prepare the K40 for any type of LPS repair

STOP: THIS PROCEDURE MUST BE FOLLOWED FOR ANY LPS REPAIR OR YOU WILL GET SHOCKED!

Procedure A: Discharge the machine

Make a discharge stick ["chicken stick"] (see photos's below):
See picture below, I think it is self explanatory. Mine is about 2ft long. You can use a dowel or PVC like mine. BTW I can sell you one for $200 ...:).
Note: I recommend PVC as wood can have high moisture content.
Ground the end of the wire opposite the taped end of the wire to bare metal on the cabinet. The terminal post on the back of your K40 is a good place after you insure that it is really grounded to the cabinet. You could replace the alligator clip on my example with a banana jack to make it more convenient.
Hold the end of the stick at the end opposite the taped wire. Put your other hand behind your back do not touch anything else with any part of your body.
DO NOT TOUCH THE DISCHARGE STICKS WIRE
Probe the bare wire end in and around the anode to discharge it before you enter the compartment.

If you see a spark just silently say "thank you Don, that woulda hurt!". 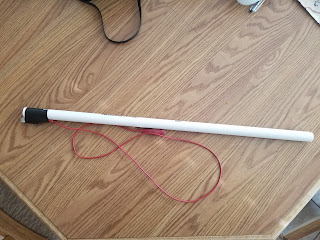 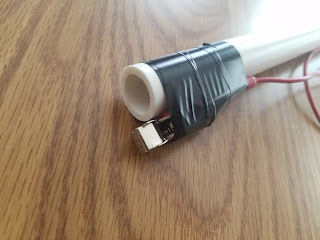 Procedure B: Removing/Replacing the LPS PCB

Procedure C: Connecting the LPS to the Laser

You can use a plug-able HV connector to connect the laser HV lead to the LPS. I recommend this approach because once done you can avoid disconnecting the anode connection when troubleshooting or replacing the supply or laser. Also consider buying a laser tube with the anode pre-connected.

The videos below show connection and disconnection of the tube from its supply and can be used as reference example:

Unfortunately there isn't a safe way to test a LPS outside of the K40, you will have to reinstall it in the K40 and test its operation by checking while actually marking. If you repaired this supply as a spare verification will have to wait :(.

"NEVER POWER UP THE LPS OUTSIDE OF THE K40!.