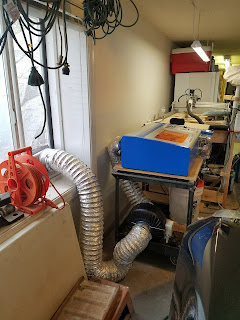 How do you sense that your exhaust air is working?

My evacuation air system uses a pretty quiet blower and is controlled by a switch on my machine control panel. While working on the machine I noticed the blower was not working but had no way to tell for sure since other than the cabinet its a closed system. Opening the cabinet certainly worked but I wondered how hard it would be to build in a sensor.
I have to admit this got out of control and one could easily argue that this problem did not need to be solved. But I cannot pass up a challenge to solve a problem that I have not yet solved. 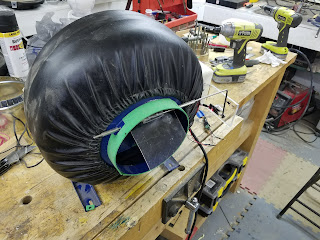 I started the design with the expectation that I could use a micro-switch with a flag on it like is used in furnaces. Turns out that it took much air to activate the switch and also blocked the airway. I also considered using a furnace air pressure switch but was not sure if had enough flow to activate this type switch. I will probably try one of these later although they are expensive.

After tinkering at the bench I decided to use an air vane, magnet and hall effect switch assy. to sense the air. The vane would sit in the air stream and an arm with a magnet activated a hall effect and amplifier that would in turn turn on an led. I powered the hall effect from a 120V to 5V switcher module I found on Amazon.

Perhaps overkill but now I can tell if my exhaust air is on and it was a fun project. All other approaches were in excess of $100, this one cost me about $10 out of pocket.

The vane is a thin piece of acrylic with a block glued to the top edge. The activator arm runs through that block and is held in position with 2x set screws. The arm simply is inserted through two holes in the blowers body with pieces of plastic tubing keeping it centered during operation. The angle of the arm is adjusted so that when the vane is pushed by the air the magnet departs its position against the hall device. A piece of plastic tubing was pushed over the hall effect sensor to keep the magnet from impacting it when at rest.

I did not CAD the design as it built on-the-fly with parts I had in the bin however the photos and videos that follow I think make the actual build self explanatory.

5V supply Note: this little modules are great for getting a small amount of 5V for sensors and such. They need a little attention as the outputs are not set up correctly. See the customer reviews for hints.

Brackets, actuator vane and actuator were hand made to fit.